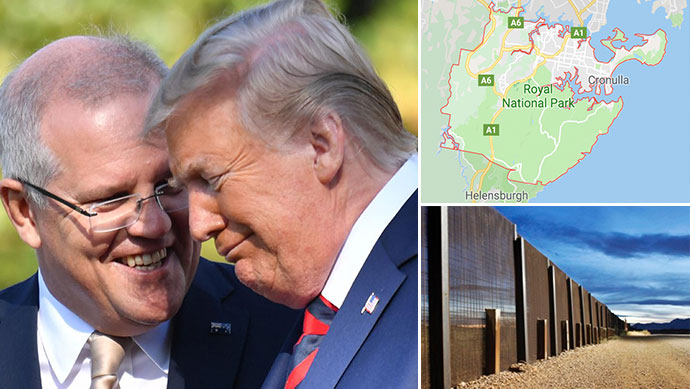 The Prime Minister has announced plans to build a US-Mexico style wall around the Sutherland Shire in Sydney’s south.

“We don’t want another repeat of the Cronulla riots,” he says. “Ethnic people coming into the Shire are posing a huge threat to our community and our lifestyle.”

Mr Morrison is Australia’s first Prime Minister to call the Shire home. He says more work needs to be done to ‘protect’ the area.

“We’re facing an influx of migrants coming into the area, especially from suburbs like Hurstville and Kogarah, ” he says.

It’s understood the Prime Minister sought advice from his close ally Donald Trump who is building a wall separating the US border with Mexico.

“Donald has been fully supportive of a wall around the Shire,” says Morrison. “He says it’s a step in the right direction.”

The federal government says the job of building the 370 square km wall has been put out to tender among Shire-based construction companies.

“We’re hoping to have the wall finished by March 2021,” says the PM. “We don’t call it god’s country for nothing.”